From communism to tourism

Disaster! Our dreams have come true!!! A report on one town’s transformation
Milan Marko (*1955)

is a lawyer and economist who works as a freelance tax advisor. He lived in Český Krumlov from birth until 2012. As the director of the Český Krumlov Development Fund in 1992–1993, he contributed significantly to converting the municipal brewery into a modern art gallery and thus to establishing the Egon Schiele Art Centrum
> more

Slavko has spent the past thirty years managing the comprehensive structural renovation and restoration, as well as the cultural use of, Český Krumlov State Castle and Chateau. His professional approach to looking after this landmark has twice earned him the prestigious EUROPA NOSTRA AWARD – in 2002 and 2008.
> more

Live from the street

A collection of local residents’ views on their city

We collected local residents’ views on their city. The respondents were people living both in the city center and on the outskirts, people from shops selling regular goods and from tourist shops, members of the KRUMLECHonline cultural/social discussion forum (which does not have one single ideological focus and which is focused on life in Český Krumlov).

There is a difference between Krumlov as home and Krumlov as a tourist destination.

It feels like we’re going in circles. There is no clear way forward.

Hypothetically: All it takes is for a volcano to erupt and somewhere and no planes to fly for a month because of the bad air, and Krumlov – because it is small and in the winter survives mainly thanks to Asian tourists – will be empty. And perhaps it will take a natural disaster for town hall to think about how to bring life back into the city.

We are no longer a beautiful city with historic landmarks, history, a castle, and galleries. This town is Disneyland.

I live in the city center, and every evening before I go to sleep I think about moving away.

There’s plenty of events here during the year, but I always see the same faces and I wonder why there I see so few people if there are so many of us living here.

People are no longer used to going downtown.

Before, the Vltava would flow slowly and spiral in lazy eddies before deciding to flow on. As part of the flood-control measures, the river was dredged and the water now flows faster. It reminds me of the flow of tourists that merely streams through the city center without stopping.

After you noticed how many benches there are here? What is the city telling you? Definitely not: “Sit down, you don’t have to go to a restaurant and pay there. Sit down with your snack, relax, take a photograph.” There are no benches because everybody wants tourists to spend money, to have something in a restaurant and leave. We don’t even welcome them!Neither tourists nor locals nor Auntie May from who-knows-where.

It doesn’t matter what you do. As long as there aren’t people living downtown, it won’t help at all.

If we survived only from locals, then we’d be gone a long time ago.

It’s the center vs. the rest of Český Krumlov, but the rest is more numerous.

Only some reasonable combination of an inhabited center and hotels can revive Krumlov and save the downtown. Otherwise we’ll all end up coming here only for work and to go to the pub or restaurant, and it’ll be empty.

You can’t buy anything downtown.

Locals don’t go into town. I live on the outskirts and come here only because of my job. Or if I have to go to town hall. But otherwise I won’t fight my way through the tourists.

When we went shopping, we could get all normal things in Krumlov, but now we have to go to the shopping centers or to another town.

And now all those Asians on top of it all… you can barely walk down the street.

It’s going to be a museum. Unfortunately, our era has seen the daily life disappear form Krumlov.

There probably isn’t any demand. That’s why the stores with useful items are leaving. I understand it. But then the people leave, too. And then there’s nothing left.

People might remember that there were services here, but they forget the rusting garbage cans or the smelly buildings because everybody heated with coal and the smoke went into the streets. Yes, there were more people, more familiar faces, but if you want to meet up with someone you will anyway. And if somebody thinks it’s too many people, let them leave.

There’s always been tourists here. Back then it was East Germany, now it’s the whole world.

As a local Krumlovite, there nothing to attract me downtown. There’s no place to go shopping if you don’t need gold, junk, or a souvenir.

I want to run a high-class store. Only Czech crystal, not like those places where you buy a t-shirt and a spit cake.

If the city center was without tourists, then there’d be one pub, one store, and fifty decaying buildings. Twenty years ago, there was nothing nice here, and even then we had some tourists.

We are active in the tourist trade ourselves, and we are well aware that it’s no good if there are too many customers. But it’s far worse if there are none. When I think back at what the town looked like in the nineties, I remember the horrible facades, and there would be no money without the tourists.

It’s been changing a bit into Disneyland, although I guess that’s a strong word… Krumlov was always attractive because it was authentic, because there was life here – a reminder of how people lived before, but all that is getting blurred now. It’s strange how there’s no tourists here at night. In the evening, it’s a dark and empty city.

Nobody could have imagined that in 20 years this place would become a backdrop for tourist snapshots. And we are the idiots who make it possible.

The city stands here, the crowds stream through, the locals cry that the tourists are stealing their city, but nobody does anything. Every individual can do something, but they only complain.

Tourism is a difficult issue. I am dependent on it. So I look at it differently that people living on the outskirts. I travel a lot, and I have to say that it’s the same everywhere. City centers are popular, and people make money from it.

I see the large numbers of tourists as a tax for the fact that people want to see Krumlov. And the noise and all that – that’s just a part of the package.

Tourists only see up to a height of about three meters – the height of the shop windows. Not any higher.

I like it here because I grew up here.

Of course, everybody has different priorities. Some people prefer to live near a ski slope or a water park. But I think that every Krumlovite has a similar sense of pride for their as it is. People are made to constantly complain, and to always want more and more.

It’s a dead city. When I go to work at seven in the morning and don’t see anyone, then I’m happy.

Krumlov is beautiful and renovated today. There’s no comparison. The fame that the city has thanks to UNESCO is truly great, but it’s negatively affect the locals. Nobody warned them what might happen.

I remember the famous statement by Dr. Slavek that Krumlov is a reward, and that’s how I see it. If you want to live in Krumlov, you have to have enough resources – and here I don’t mean financial, but mental.

It’s a beautiful town. Everybody thinks that, but it’s not much good for practical living.

Living and working in the downtown is like everything around you is your garden.

It’s a beautiful city. When you live here, you don’t even realize that it’s here. So it sometimes takes someone who’s not from here to remind you how beautiful it is here…

Lots of people claim that the center is totally depopulated and so on, but that’s the normal evolution of the 21st century: in order for people to be able live and earn a living from this space, a part of the city is converted into accommodations that earn good money that is used for renovations. Tourism is a benefit because it is the only source of earnings that can be put into renovating the city’s landmarks.

People say there’s nothing downtown, but they did it themselves. We had everything there – a butcher, a bakery – but they couldn’t earn a living and so they closed down. There was absolutely everything there before, but people stopped shopping there and started going to shopping centers.

I have a bit of a problem with people constantly saying how there isn’t anything here and how they have to drive to Budějovice for everything, even the movies. I have no idea what they drive there for. In my opinion, Krumlov has almost everything people need.

If there isn’t any particular event going on, then there’s no reason to go into town. Krumlov could be thirty time more beautiful, but when you live here for 37 years or more, than the novelty wears off.

When we walk through town as tourists, when we play at being tourists, then it’s pretty here. In the summer, we head out on the terrace for a coffee and feel like we’re on vacation.

Sometimes I like to go downtown to just look around, and when I run into a local then I greet them even though we wouldn’t normally do so, because it’s such a rare exception. We always report to each other – I ran into three Krumlovites today!

People don’t go into the center if they don’t have to.

I think that there is community life here, only it’s hidden by the masses of people. If you want to find something for yourself here in the center, then you will.

In the past, the Roma used to sit around here in the center, talking, and I’d say that we got along with them. They didn’t against us whites and we weren’t against them. We even went out for beers with some of them. People somehow lived more together.

My wife and I are used to how it is. We know that we can’t expect much from this town…

Before, there used to be more old-timers. My parents would always be stopping on every corner, and I suffered through it as a kid, always having to wait until they got done chatting with someone. But on the other hand, it was alive.

When I was little, the center was so ugly that we didn’t go there. We were even afraid. The town offices and shops were on the square, but it wasn’t anything earth-shattering. I don’t think it was any better. Sure, today it’s all gold for tourists but at least it’s pretty and renovated. 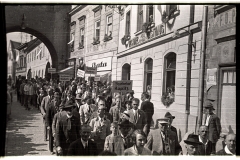 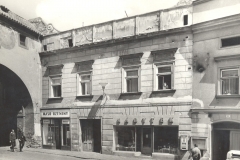 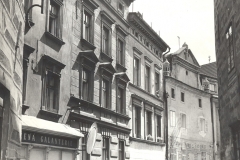 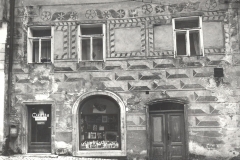 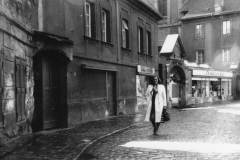 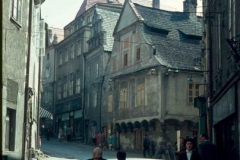 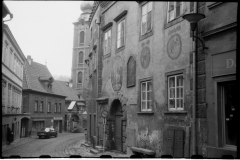 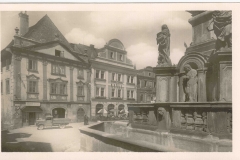 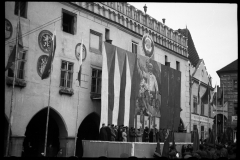 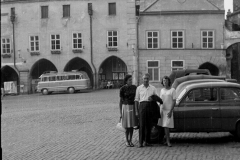 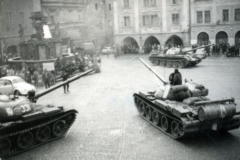 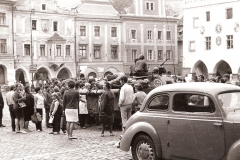 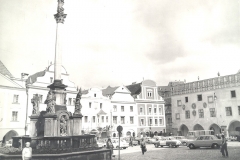 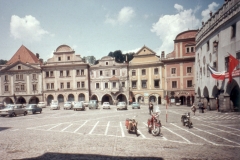 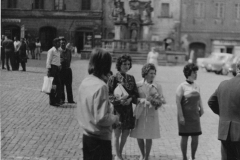 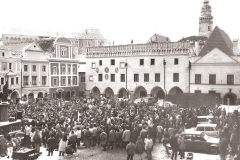 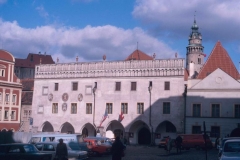 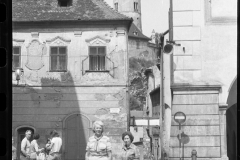 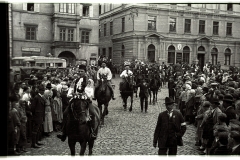 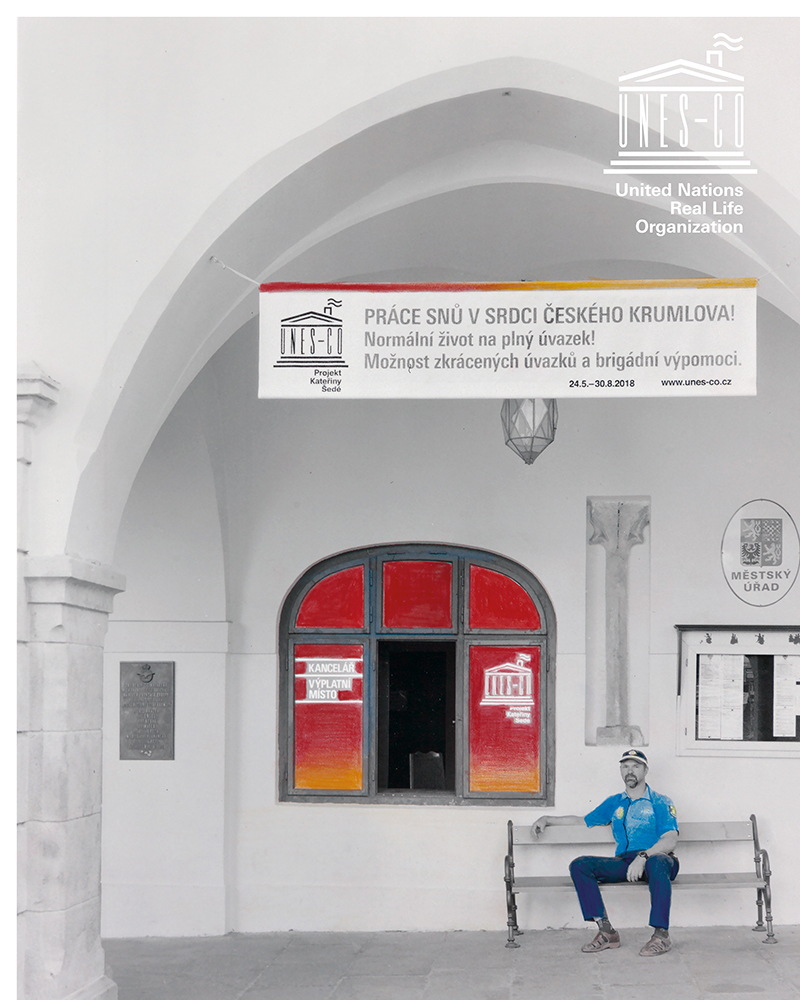