I have read that you want to subsidize housing in the city center. First they make it impossible to live downtown, and then they subsidize it. Get rid of the obstacles. The main cause for the depopulation of city centers is pedestrian zones. A senseless jihad against motorized citizens. Pedestrian zones are good for tourists, less so for natives. Abolish pedestrian zones, ridiculously wide sidewalks, and the clever system of one-way streets and bans on cars. Bring the cars back, let the locals park by their house, create new parking spaces. Without this possibility, nobody in today’s day and age, when nearly every family owns a car, will move into the center. Create parking so that the first hour is free and everything after that for a fee. Locals would have some kind of monthly payment. And if possible, then underground, where long-term parking would be significantly cheaper than on the surface, where there would be parking mainly for visitors. Regulate shop rents according to demand. Lower rents for local services. Deliveries any time, and stop making life difficult for small businesses. Then you won’t have to subsidize housing.
Greetings,
V. H.

Český Krumlov is abuzz with an artistic project by the young artist Kateřina Šedá called UNES-CO. As part of this project, she will pay selected participants (primarily from among Krumlov residents) to pretend that they live in the town’s historic center, living an ordinary life while cameras will broadcast their “pretend-life” to the 16th Architecture Biennale in Venice.

If we look at Unes-co as a reality show (for instance, “Wife Swap”), then why not? The development fund provides the housing, the so-called inhabitants hand their blankets out the window every morning, and schoolchildren will play soccer in the streets. The cameras capture a Chinese tourist kicking a ball around with the “local” children, all of which will increase the number of visitors to town and thus generate even greater profits. Why not support a project for 2 million, if it’s not OUR money? The project is being paid by the Ministry of Culture. Excellent advertising, and for free! The artistic performance aims to call attention to the depopulation of downtown Český Krumlov and to help change this situation – in the words of the artist.

Strangely, Krumlovites are up in arms against the project. They are asking how such a reality show can help return the city center to the town’s inhabitants? Won’t we look like a bunch of FOOLS at the 16th Venice Biennale? Who else is responsible besides our politicians? In the name of greater profits, they drive out local residents, replace their homes into all kinds of shops, and then pay outsiders to spend three months pretending to be LOCALS. They forbid real Krumlovites from taking up space with benches, front yards or signs saying “public space,” but they’ll pay outsiders to do the same, and even give them three parking spots on the main square for free! Absurd!

I remember how Senator Tomáš Jirsa pointed out this problem more than ten years ago. He hired two architects and asked them to find, based on a comparison with similar towns, a way of bringing local residents back into the city center. I even attended several debates on the subject. The town hall quickly rejected all proposals with the argument that “we don’t want advice from the Lords of Hluboká,” and didn’t go any further towards trying to find a solution. I remember how Mrs. Zikmundová artgued that there was no decline in the number of downtown residents. I remember the founding of the Český Krumlov Development Fund, which was entrusted with residential buildings in the city center with the justification that the fund would be the best guarantor for the positive development of the city center. The fund will prevent the departure of local inhabitants and will maintain and promote civic amenities.

The depopulation of the city center is certainly a problem, but it deserves a real solution. Diners, pharmacies, stationery stores, barbers, workshops, tailors and local residents will not come back because of a reality show in which we will pretend to be a functioning city.

Since I am a Krumlovite and an artist who is not dependent on public grants or local politics, I have been asked by local citizens to say something about the planned UNES-CO project. And so I am. Political approval is easy to get: all you have to do is wrap yourself in the names of important institutions and let yourself be introduces as a “WORLD-RENOWNED ARTIST.” Worldliness is truly the charm of all charms. Of contemporary Czech artists alive today, I don’t know a single one who might be world-renowned. Of those who are no longer alive, I would quietly whisper, “František Kupka?”

Krumlov’s rebelling citizens – I must admit that you are right. For instance, when some of you prefer to fix a sidewalk instead of organizing the UNES-CO  project. Or those of you who want the city the buy benches instead, or those who have called the current state of affairs ABSURDISTAN. But it’s a cute game, so let those who want to play it, play along. Just don’t try to tell as that the artistic performance called UNES-CO is supposed to help change things.

Let’s admit to ourselves that at the start of Český Krumlov’s modern history, the city was led by a visionary mayor. But the VISIONARY was replaced by POLITICIANS, and so the city came to be controlled by market-oriented hawks who claimed that there was no other way, that anything else would be communism. Another good incantation! Decent people don’t disagree!

Let’s not reject “advice from the Lords of Hluboká” and let’s not say that it can’t be done. In Hluboká, residents and tourists live in a symbiosis, local politicians do not push out their citizens or come up with ever newer ordinances against them – tools for repression. The town of Hluboká nad Vltavou is economically prosperous, affluent, while Český Krumlov is still poor. Perhaps next time we could hold a reality show called “Town Council Swap.” The invited the councilors from Hluboká nad Vltavou, to apply their “advice from the Lords of Hluboká” in our town (so things wouldn’t be so sad).

What if our town hall invited the mayor of Hluboká nad Vltavou to attend a public discussion on the subject of how to deal with the depopulation of downtown Český Krumlov?

OR IS THERE SOMETHING ELSE? WHAT IS THE REAL THING THAT CAN’T BE DONE?

Should be afraid that it can’t be done, that it’s not possible, or is it not possible because there are no VOTERS living downtown, so why do anything for them?

I have a hunch what it’s all about, to maybe next time!
M. Páral
(sculptor, local patriot ready to help his city – but not by entering politics)

Hello,
I have been following various discussions on FB regarding your project, and as a native Krumlovite who now lives in Prague I would like to thank you for stirring the waters of Krumlov. I participated in the city’s strategic plan two years ago, and my sister M. B. and I helped launch “Experience Krumlov Differently,” so I see this as another step towards opening up debate and sharing the message that Krumlov is beautiful but it’s not an easy place to live. And I am truly happy that it is you who is doing this – someone from outside, with a sense of perspective and with an artistic approach. I am looking forward to seeing how the whole things plays out!
Based on the reactions by some Krumlovites, I get the sense that you must be getting lots of hate mail and other complaints, so I said to myself that just to be sure I would write you something in support. ))
Good luck!
B. H.

As I write, Český Krumlov is in the midst of heated debate regarding the project by KateřinaŠedá and curator Hana JirmusováLazarowitz that will represent the Czech Republic at the 16th International Architecture Exhibition in Venice. It is interesting to follow how quickly the debate surrounding this project has taking a negative direction, and what this negative actually entails. The first typical arguments is, of course, money. Why give so much money to something like this? How much is it really going to cost, and what other things could be done with this money, and better?A children’s playground, or something for the hospital. We recently heard similar viewpoints expressed in relation to Ferdinand Vaněk’s bench in front of the National Technical Library.The average citizen finds it hard to accept that a bench could cost so much money. It is unacceptable despite the fact that it is primarily a work of art. Artists are supposed to be poor, and money for culture could be used elsewhere and better. We have encountered this viewpoint countless times in the past.The second pillar of all negative arguments is the essence of the project itself, which is to place people inside empty housing units in the city and to bring normal life to the city center for just three months. The public announcement seeking participants in the project was sent out to local residents living on the city’s outskirts, and also to people from outside the city. Many residents of Krumlovfelt a need to respond. They have asked about the purpose of the project, what it can achieve, and so on. It is interesting that we are unwilling to accept the fact that the project is not a solution for the situation that the city has gotten into over the years, but that its aim is to explore this situation, to around discussion, and to ask questions. Who other than someone from outside the city can hold a mirror up to us that shows how people live (or rather, don’t live) in our historic city center. Everybody subconsciously knowns that it will  not be a pretty sight, and perhaps that is why we are fighting so hard against seeing this beautiful town through the viewpoint of cheap food stallsand fake amber. When we make our way through downtown and somebody will be in our way because they are kicking a ball against the Renaissance facade of a historic building, let us stop for a moment. Let us stop just as we have don’t countless times before, when we didn’t want to ruin a tourist’s snapshot and all the other things we no longer notice as we apathetically make our way through the crowds of tourists. Let us stop and consider what Český Krumlov means to us. I believe that Kateřina Šedá’shard work and effort can show us this long-standing problem from a new, different, and perhaps even surprising perspective. Her project does not seek solutions – those will be up to us, the citizens of this city.
Martin Busta, director, St. Agnes of Bohemia Secondary School of Art and Design
Český Krumlov, April 2018 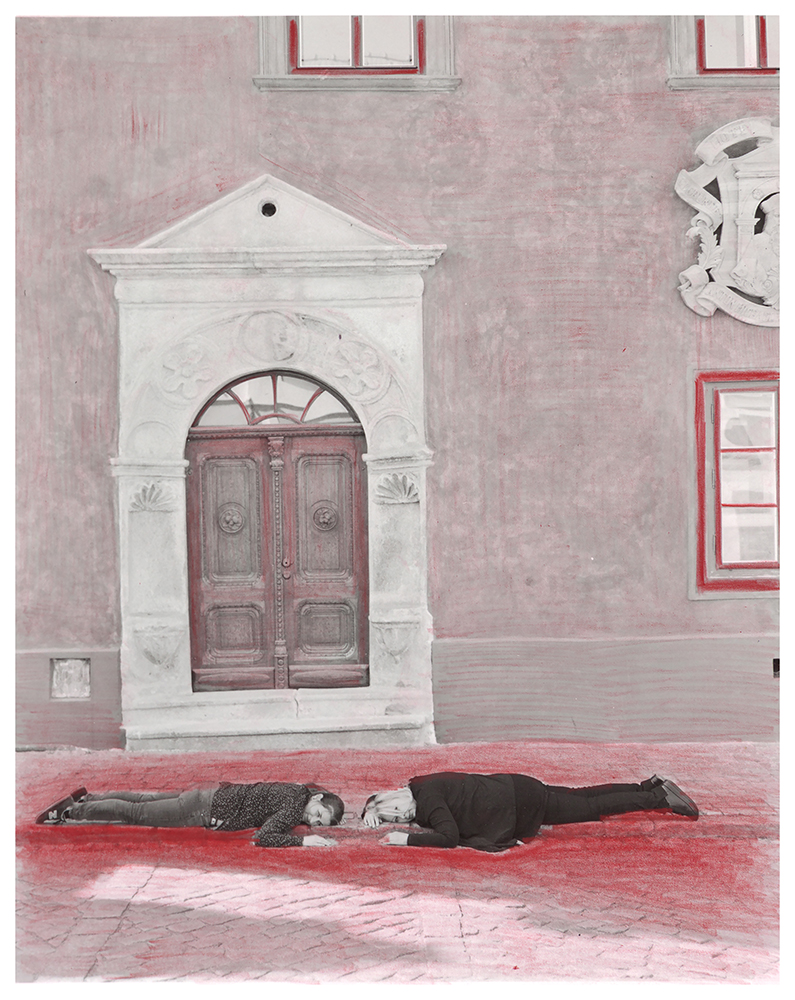