Yesterday evening, we ran out of some important medicine that has to be taken every morning and evening. So we decided to deal with it first thing Saturday morning.

As is the case everywhere (small towns and villages), in ČeskýKrumlov it’s not exactly the greatest when something like this happens on a weekend or outside normal working hours.

I find the address of the local hospital and head there on foot. It’s a beautiful walk – less than 1 km. It would have been even nicer if it hadn’t been in the sun with temperatures exceeding 30 degrees Celsius. The gallery below shows some of the photographs I took along the way.

As I am standing in front of the hospital, I’m not entirely sure if I can see it. You can judge for yourself on picture no. 3 🙂

The checkup and first aid were professional, I got my prescription, and off I went to find the hospital’s pharmacy.

The nurse explained to me where to find it, but then I remembered that it was the weekend and I had to go shopping at Kaufland, except that’s a bit further away. When I asked how to there, the nurse said that I should drive down the main road to Budějovice. I told her that I was there on foot and that my car was at the parking lot on the other end of town.
So she and the doctor suggested that I walk to the gas station across the street and take a cab.
I did as they suggested, but unfortunately there was no taxi waiting at the station, so I headed out on foot.

This walk wasn’t nearly as pleasant as the previous one, and walking along the highway in the scorching hot sun was difficult, to say the least 🙁
So I decided to try hitching a ride. About 400m meters from Kaufland (although I didn’t know it at the time), I got lucky and someone from Krumlov stopped and asked where I was going.

His smile faded a bit when I told him I was going to the pharmacy at Kaufland, but he took me nonetheless.

Everything went smoothly at the pharmacy, so I headed back home.

Along the way, I came across a beautiful playground near the housing estate (see photo) and had an ice cream. I got to talking with the ice cream vendor, from whom I learned some more about the locals. She said she’d lived here nearly two decades but that it had been a big mistake to move here. The people are mean and they hate Praguers even though they all want to get there because of work. She also told me to never tell anyone where I’m from or they would try to rip me off any chance they get. Just a few choice quotes from our conversation: “Hicksville,” “my life ended the moment I moved here,” “stupid f****** small town,” and so on.
I can’t judge Krumlovites’ behavior in this regard (nor do I want to). For that, I haven’t been here long enough. But I know that I’m not telling anyone anymore where we’re from.

A little further down the road, I come across a “gate” by a row of houses. I had no idea that this wedding tradition was observed even in towns the size of Krumlov, which was a pleasant surprise.

One disappointment, however, was that on the square I found a building with the sign “Three Ravens Pharmacy” and one “Prince’s Pharmacy,” but instead of pharmacies there are a café and an ice cream shop. I guess they make more money, but people living downtown could certainly use a working pharmacy.

On the other hand, the phenomenon of services moving out of the center and into shopping malls on the outskirts of town is something that is not unique to Krumlov but that is found in most towns in the Czech Republic. 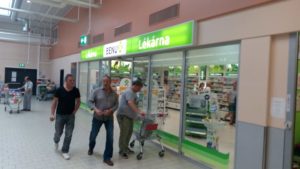 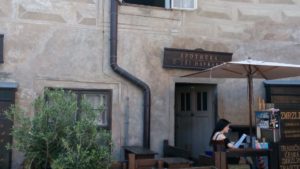 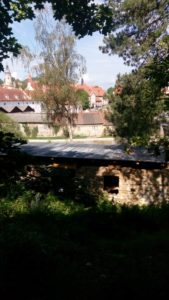 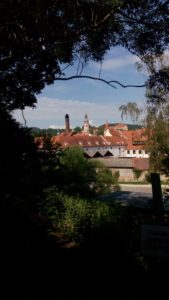 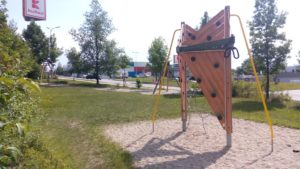 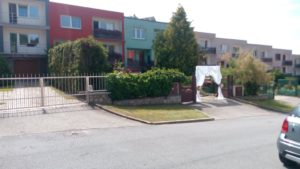