After a few days watching the ever-present crowds of tourists in the busy city center, you suddenly recall the people sitting around Mediterranean towns and their looks or occasional comments 🙂 Sometimes I’m tempted to behave similarly.

Besides going shopping at the local grocery store, today we managed to see the castle and its surroundings, and before our shopping trip in the morning the kids joined a musical production outside our windows. It ended with dancing that even attracted onlookers and passers-by – and say what you will about Asian tourists, you can’t deny the fact that they are anything but passive.

I’m beginning to understand the locals. Perhaps they understand that the project isn’t just a circus at their expense, but that the things we are learning and experiencing, and our reports and the project’s other output, will hopefully be of use especially for them, so that their city can be made livable.

On the way back from the shopping, with four kids and a stroller bumping along the cobblestones, I cursed the passing taxis and cars with permission to drive into the center. Quite a lot of them passed me during my walk. It’s really frustrating to be dragging your shopping home while right behind you is a car full of tourists and their bags.

But I also tried to ask people for help – which required knowing English – and each time I was met by a very helpful response.

We cleaned out a fountain on a nearby street, discovered and tried out a skate park, helped a woman find the public restroom…

I don’t know how much the town’s leaders know about their citizens, but according to the people who live here there’s quite a lot of things you could put downtown in order to give locals a reason and the chance to come out. Senior citizens could use a drop-in center with computers and internet, perhaps some courses or lectures, and physical exercise. The same thing for people on parental leave. There’s no markets for locals, and there could be greenery – even some planters with herbs would be enough. There’s a dire shortage of garbage cans, considering how many people pass through here every day – and that’s not even mentioning recycling.

I’m convinced that even the tourists would be interested in how people really live here, what you can buy and experience as a normal citizen – and not just to see a stage set that they pass through in one day. 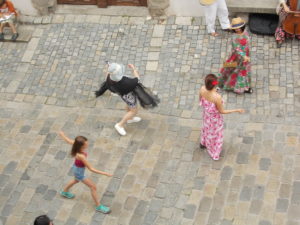 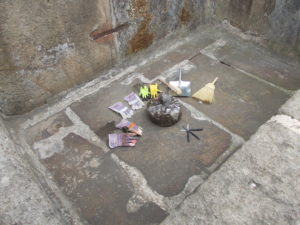