We were looking forward to our first normal activity in the heart of Krumlov, but after a hectic week at work (I work at a cultural institution downtown, Pavel at a school), we really didn’t feel like being among people. So we decided to start slowly – Pavel has an exam in English didactics approaching, and so he sat on a bench on the square, studying, and I finally had some free time to teach myself embroidery.
At noon, we met with Egon, got our instructions as to where to go, relocated to the square, spent some time looking for the camera to make sure we’d be seen in Venice, waited for a free bench, and then finally got to work. After ten minutes we started to feel pretty warm, after twenty our butts started hurting, and after half an hour we were boiling and thirsty and the benches were such a pain that we started looking around for somewhere else to sit. Luckily, it started raining, and since we couldn’t find any shelter where the camera might still see us, we chose a strategic retreat for lunch. Does rain count as a legitimate reason for not engaging on your work in public space?

After lunch, we chose a bench facing the sun since our shoulders were already sunburnt. My embroidery was slowly starting to look like something from a 1978 fashion magazine, and Pavel was disconsolately staring at his books. Every now and then, an Asian tourist looked over my shoulder to see what I was doing, but they clearly decided that there was no point in buying anything like it (I don’t blame them) and left again. One woman asked whether I was selling it. We got more attention from the locals – I spent some time talking with a Nicaraguan busker who’d settled in Krumlov why we were sitting out on the square in this heat like idiots, and several friends shared a similar view. But that was about all the commotion we caused. Then the fountain freed up and we moved over there. The stone was more comfortable than the wooden bench. When Pavel had had enough studying and started doing a crossword puzzle in one of my socialist magazines and couldn’t come up with a Russian aircraft with three letter, I asked a passing Russian-speaking family for help. After getting over their clear surprise that Krumlov (seriously?) still had some permanent residents, they offered us their help and engaged with us in a surprisingly friendly chat (only the mother spoke English). But even our joint efforts weren’t enough to figure out whether the abbreviation for Tupolev in the 1974 crossword would be OAO or OKB.
At six in the evening, we left the square and went to Široká, where we had coffee and chatted with the family there. The mother of the group has my admiration – I wouldn’t leave my child out in a baby carriage alone even with the windows open. All it took was for us to be gone half a minute and some Korean girls were taking pictures of themselves with the carriage, all the while shrieking with excitement, and they looked very confused when I let them know that I didn’t like it.
To sum it all up: It is surprisingly easy to study and sew on the square. The background noise of the people is actually quite pleasant and helps you concentrate. But the benches are horribly uncomfortable if you sit on them for any longer period of time, plus they are ridiculously arranged in triangular patters, so you can’t observe your surroundings but just more and more tourists. Nor is there any shade, and there is no place to h ide from the sun or the run. When we ran out of water, we didn’t find any place to fill up, and so we went to Široká.

(By the way – is the water in the fountain drinkable? Is there a sign anywhere?) 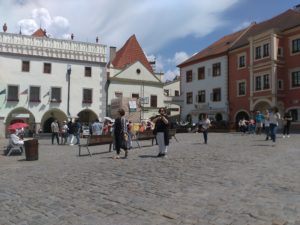 When it came to the constant photographing, we tried to fight fire with fire – after all, nobody wants a picture of us aiming our phone at them, right? Hmm, apparently they do.