Notes on the history of Český Krumlov

Slavko has spent the past thirty years managing the comprehensive structural renovation and restoration, as well as the cultural use of, Český Krumlov State Castle and Chateau. His professional approach to looking after this landmark has twice earned him the prestigious EUROPA NOSTRA AWARD – in 2002 and 2008.

The town of Český Krumlov is an exceptional city of a picturesque architectural and artistic character, endowed with nature and history, the charm of the ages, and ancient fame.

Krumlov lies on a meander of the Vltava River, which has laid bare the surrounding rocks and whose rounded curves have determined the layout of the town. The castle and chateau on the long and curving ridge rising over town across the river protectively envelops a part of the town, whose layered collection of small gabled houses with painted or sgraffito limestone facades and red-tiled roofs has filled in the cramped space of the peninsula. The course of the narrow streets copies the turns of the river, and the tight rows of houses rise towards a hilltop crowned with the majestic volume of the church and the residential church buildings.

Since its founding in the 14th century, artistic and architectural flowering has alternated with stagnation or decline resulting from natural elements or human passion and unrest in a cycle of roughly every hundred years.

The 16th (Renaissance) and 18th (Baroque) centuries in particular have given the town its iconic appearance and the distinctive, picturesque character that is has retained to this day.

The surviving architecture and its evolutionary traces, archival data, historic plans, iconography, and historical photographs tell us much about Krumlov’s architectural development, which was generally quite even and uninterrupted from the 15th to the 19th centuries. Exceptional events (an earthquake in 1583, floods, windstorms, localized fires) did not do much damage to the city as a whole. More seriously felt have been the impacts of climate change, war, land reform, economic crises, and changes in property ownership… in other words, the full range societal changes and social and economic phenomena.

In the late 19th century, the town’s valuable Renaissance and Baroque heritage was enriched by elements of the Belle Époque. The excellently preserved and carefully maintained condition of the local buildings was matched by charming and cultured green spaces, excellent artisanship, and a wide range of minor architectural elements on the squares, streets, and alleyways – lighting, benches, pergolas, awnings, shop windows, restaurant terraces, fencing, chapels, etc. All these factors combined to form a pleasant and charming cultural environment. Economic prosperity led to a flowering of social and cultural life, and weekend life was characterized by exhibitions, activities in public clubs and associations, going to the riverfront baths, or walking along the promenades.

The two world wars and the socialist era were less fortunate times for Český Krumlov. Although the town avoided direct destruction, these three long periods of decline in close succession resulted in the city’s significant degradation. Although we do see some excellent repair work on building details, the city’s greenery slowly disappeared, as did floral decorations and the rich assortment of public street furniture.

Especially in the period from the 1950s to the 1970s, the overall decay and degradation were amplified by the complete wearing down or complete destruction of construction details such as windows, doors, gates, chimneys, fences, plaster, painted facades, masonry elements, cornices, and roofs. Building maintenance during this period was woefully lacking in both the volume and the quality of work performed.

In late 1980, Český Krumlov Castle and Chateau was in a very poor state of repair; it was a dilapidated, worn down, unsuitably used, and non-functioning old residential seat.

The period after 1990 was characterized by new social and political changes and by the city’s incredible transformation. The neglect of the previous generations was rectified with immense energy, activity, enthusiasm, and eventually also with growing expertise and professionalism. The enthusiasm that drove this transformation came from not just a few individuals but from large groups of local residents, and it lasted not weeks or months but several years.

In my view, this enthusiasm was responsible for the city’s transformation, and future historians will include it among the most important and decisive moments in the history of Český Krumlov over the past five centuries.

Drawing inspiration from the writings of the Renaissance-era chronicler Václav Břežan, we might describe the town’s transformation since 1990 as follows:

“… the entire town, neglected and degraded, unused or poorly used, was in nearly all places repaired, restored, and uplifted with a sense of respect for the historical, cultural, and social importance of this ancient and dignified residential city…” 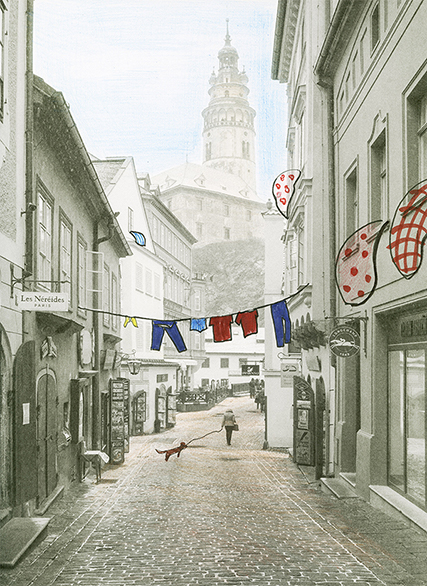